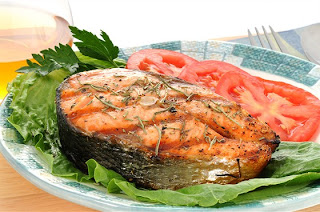 The volume of imports of seafood from Alaska to the Ukraine in 2011 grew by almost a factor of 2 in quantitative terms compared with 2010 and amounted to 47 million dollars.This was announced by U.S. Ambassador to Ukraine John Tefft met with reporters at the launch of Alaska seafood, organized by the Institute of Alaska Seafood Marketing with the support of the U.S. Embassy in Ukraine. The event took place in the fish-market “Fish World” South Pacific “.
At the meeting, noted that the global financial crisis, the U.S. seafood trade volumes in Ukraine is fully recovered and continues to grow. By results of 2011 the volume of imports of Alaska seafood has exceeded the best pre-crisis years.
For the first time consumers in Ukraine have discovered the American seafood in 2000, and since then the number and variety of fish represented only expanded. The last few years, fish consumption in Ukraine Knuckles . Traditional varieties of inexpensive fish Ukrainians increasingly prefer the more expensive and high quality.
It should be noted that fish and seafood of Alaska live in the wild Pacific Ocean. Waters of North America, their habitats, are recognized as one of the cleanest in the world. Alaska fishing meet modern technical requirements to preserve the quality of products. Catch carried out strictly in accordance with the law and is controlled at the state level in order to preserve natural resources and the renewability of fish populations in the natural environment.

Prices of olive oil fell to a minimum of 10 years

Natalia Sakhatska - July 18, 2012 0
Prices of olive oil on the world market fell to its lowest level in a decade. It writes The Financial Times. In May this...